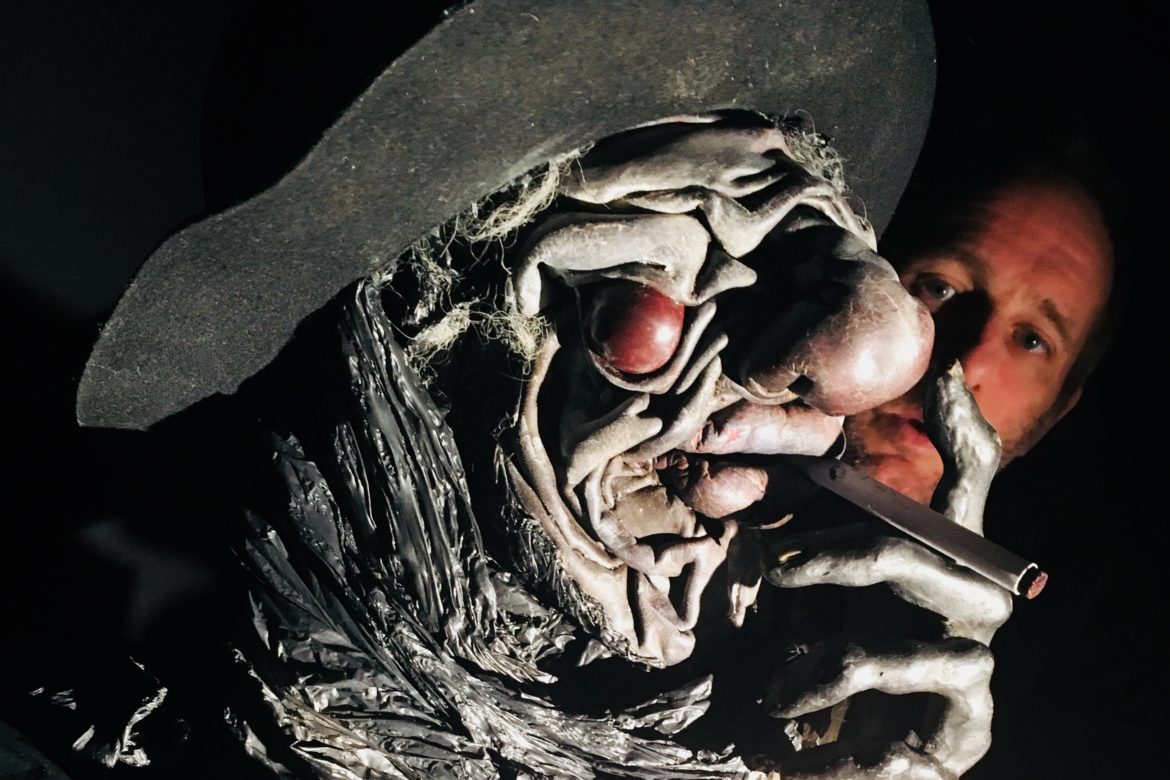 Multi-award winning puppetry innovators Blind Summit present the UK premiere of their brand new show HENRY, a 3 person, 1 puppet theatrical memoir from beyond the grave, at the 2018 Edinburgh Festival Fringe. Henry will be staged at the Pleasance Dome (venue 23) from Saturday 11 to Sunday 26 August 2018; and follows the huge Edinburgh Fringe successes of Citizen Puppet (2015) and The Table (2011), both Scotsman Fringe First Award winners.

Henry is set within a puppetry Master Class on the subject of ‘puppetry possession’, hosted by master puppeteer Mark Down. Mark brings to life a puppet made of bin bags which begins to take on the character of his father, celebrated actor and old ham of the title, Henry Chessel.

With the help of two slightly sinister, hooded puppeteers (Fiona Clift and Tom Espiner) masquerading as students, Mark tells the story of Henry’s rise to fame, fall from grace and the last week of his father’s life. Haunted by his father’s recent death and a neglected childhood Mark explores the relationships between father and son, acting and puppetry, form and function, life and death.

In an absurd twist all is not as it seems. As Henry tells his actor’s tales, Mark reveals that he never actually knew his father and the entire basis of the relationship between father and son, actor and puppeteer, puppeteer and puppet, narrative and truth are drawn into question. Is Mark making it all up? Is his father? Does it matter?

Henry is an entertaining but thought provoking show that ultimately acknowledges that everything is invention and the greatest truth is found in the biggest lie.

Blind Summit Artistic Director and Master Puppeteer, Mark Down, performs in and directs Henry. The incredibly accomplished puppeteers Fiona Clift (The Table, Citizen Puppet) and Tom Espiner (The Table, Madam Butterfly) play the hooded students. Julian Spooner, Co-Artistic director of Rhum and Clay Theatre Company, and Freelance Theatre Director Alex Crampton are collaborators and assistant directors of Henry. The production was devised by Blind Summit and written by Mark Down.

Blind Summit is a London based, internationally touring producer of puppet-based theatre under the artistic vision of Mark Down. The company was founded by Mark in 1997 and is considered one of the world’s leading puppet theatre companies.

Blind Summit are an Arts Council England NPO and Henry was made in association with Il Funaro, Pistoia.

The Blind Summit Team for Henry:

Mark Down and Blind Summit Theatre

Blind Summit is a London based, internationally touring producer of puppet-based theatre under the vision of Artistic Director, Mark Down, one of the world’s leading puppeteers.

It was founded in 1997 by Mark Down and is considered one of the world’s leading puppet theatre companies. Since then Mark and the company have been pioneering their own style of “Extreme Puppetry”, a character led, improvisational reinvention of traditional Japanese Bunraku puppetry, provocative, funny, political, outrageous, accessible theatre that pushes the boundaries of puppetry.

Their shows such as Low Life (2005), 1984 (2009), and The Table (2011), have toured the world in theatre and puppet festivals. Mark’s work as Director and Master Puppeteer has drawn plaudits in a series of landmark opera and theatre productions all over the world. He has collaborated to create the breath-taking puppetry in large scale productions such as Anthony Minghella’s Madam Butterfly, for the English National Opera, and Danny Boyle’s Olympic Opening Ceremony. In 2014 Mark directed his first full scale puppet opera staging of Stravinsky’s Le Rossignol for the Bregenz Festival, since voted the Best Festival at the International Opera Awards 2014.

Mark’s work as Director and Master Puppeteer has drawn plaudits in a series of landmark opera and theatre productions all over the world, including commissions for the Spoleto and Bregenz Festivals and, in Anthony Minghella’s production of Madame Butterfly, for the English National Opera and, currently, the Met Opera in New York.

Their shows are devised and directed by Mark Down in collaboration with a cohort of exceptional trained puppeteers, makers, designers and lighting designers, who have also contributed to the creation of some of the most extraordinary spectacles of recent years, including War Horse and Pinocchio at the Royal National Theatre, Boris & Sergey by Flabbergast Theatre and The Lorax at the Old Vic.

What Critics have said about Blind Summit productions:

“Blind Summit are the UK’s puppet masters” The Guardian